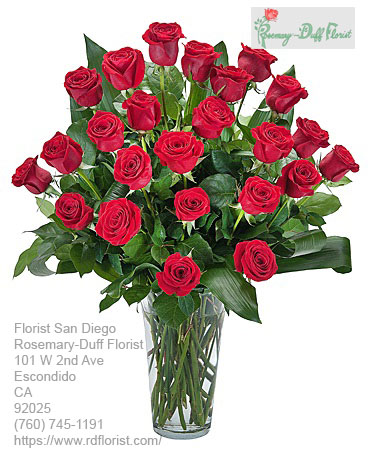 Rosemary-Duff is a florist in San Diego CA. In the last article, we learned about the history of flower arrangements. We looked at the tales behind the names of flowers. We also discovered how societies used flowers arrived in their everyday lives. From there, we learned how floristry turned into the high-profit industry that it is now. Here, we'll explore how floral design progressed from ancient to modern styles. We'll go through each important period in history. We'll trace changes in floristry from Ancient Egypt to the Middle Ages. Then, we'll cover art movements in France to the Victorian Period in Europe and America. Finally, we arrive at its contemporary forms today.

Call Rosemary Duff Florist the flower delivery experts in San Diego CA or surrounding areas today for your free estimate or if you have any questions, give us a call at (760) 745-1191

We set out to create a timeline of the changes in floral designs. Here, you'll find a short yet in-depth account of how floral design developed throughout history. Let's see how designs transformed from fixed to innovative styles! Egyptian Period (2800 - 28 BC). Ancient Egyptians used everyday flowers for temple offerings. They also set them in centerpieces for banquet tables. They were also partial to showing off their wealth. One way to do that was by weaving flowers like jasmine and violets into garlands. These consisted of a single flower with one or two leaves on both sides. This simple repeating pattern created an elegant design for their feasts. Greek Period (600 - 150 BC). Much like the Egyptians, the Greeks used flowers in religious customs. They wove blossoms into garlands, wreaths, and laurels. Cornucopias also became a staple in festive activities. The Greeks often used triangular forms for their creations. They included white blossoms as a sign of purity.

Roman Period (28 BC - 325 AD). Romans continued the Greeks' use of flowers in their customs and traditions. In fact, they created even more ornate designs of wreaths and ceremonial crowns. It was also during this time that people started to make note of diverse floral scents. This then became an important factor in making flower arrangements. Byzantine Period (320-600 AD). People in the Byzantine Era adopted Greek and Roman styles. But they were the first to mix fruits with flowers in wreaths. They also placed greens in vases to create harmony. For pleasing color palettes, they accented warm shades with cool hues. Middle Ages (476-1400 AD). The presence of flowers in art waned during this era. They only appeared in tapestries. This resulted in the creation of a line of cloths called millefleur. This translated to "thousand flowers". Monks across Europe kept floral design alive. They tended to their gardens to grow varieties of flowers and foliage. These would act as the subject of many art forms later in history. Renaissance Period (1400-1600). Oriental styles and the stress on balance influenced many Renaissance artists. They included fruits and foliage in crafting harmonious floral designs. This led to the creation of now well-known Christmas wreaths. Renaissance artists were also keen on using flowers en masse in their floral arrangements. Baroque (Flemish) Period (1600-1775). Baroque painters were the ones who set trends in floral designs. (At least, the ones we still see today). Floristry by then was not yet seen as an art form. As a result, flowers of various colors and sizes were often coupled together. This was a way for the artist to express themselves. They also preferred tall flowers and oval shapes in arrangements. Artists from the Flemish period also started leaning more towards uneven designs. They used wild components like birds' nests and eggs in their works. French Period (1600-1814). This period saw a distinct divide in the styles of lovely arrangements. Subtle, arc-shaped designs dominated the Baroque period and Rococo. Simple, triangular shapes were the styles of periods under King Louis XVI. Early American Period (1620-1720). Early American florists took after French Empire and English Georgian style. They set flowers en masse with various colors to adorn their homes. English Georgian Period (1714-1760). Floral design during this era usually consisted of a simple bundle of blossoms in a vase. Later on, they went into more elaborate designs. They even formed vases for keeping flowers at particular angles. Colonial Williamsburg Period (1740-1780). This era gave room for creativity and the arts, including unique arrangements. Artists crafted foliage with fine feathers and grasses into fan-like shapes. They finished it off with bold blooms at the center. Victorian Period (1837-1901). During this time, floral design became far more lavish. It often consisted of overflowing flowers and foliage. Circular shapes became the standard. They also honored roses as Europe's favorite. Lilies, tulips, and other popular garden flowers complemented the center roses. American Victorian Period (1820-1920). America's Victorian period leaned towards deep colors. Colors like royal purple, ocean blue, and magenta were among their favorites. They often used white blooms to tone down the look. They also continued creating vases for holding flowers.

Are you in the San Diego, California area and are looking for a business that does flower delivery or same day delivery near me? Are you interested in having fresh flowers delivered? Or send flowers to your loved ones and for sure that's hand delivered? If the answer is yes, you have found a great resource to take care of all your florist needs, we are the knowledgeable florists in the local community. We are the best florist in San Diego, California. No arrangement is too big or too small for us. We provide full-service floristry services.

San Diego is a city on the Pacific coast of California known for its beaches, parks and warm climate. Immense Balboa Park is the site of the renowned San Diego Zoo, as well as numerous art galleries, artist studios, museums and gardens. San Diego, California coordinates 32°42′54″N 117°09′45″W.